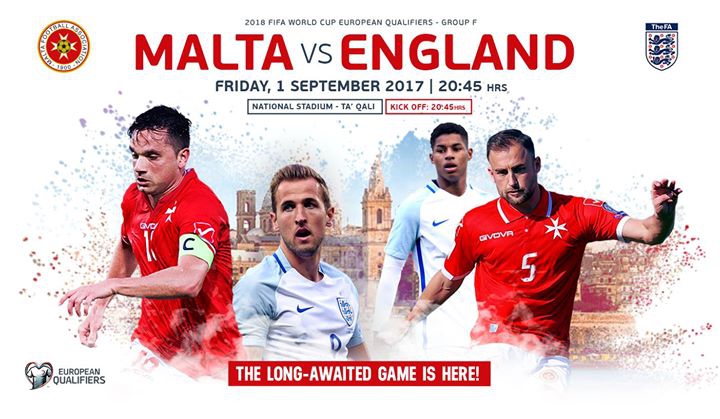 With the FIFA 2018 World Cup qualifying campaign entering a crucial phase, the September 1 match at the National Stadium has assumed added significance for England who lead Group F with 14 points, two ahead of Slovakia and three clear of Slovenia.

As for the Maltese team, our players will surely be aiming to do the nation proud with a spirited performance as they look to collect their first point in Group F which also comprises Scotland and Lithuania.

Around 2,000 Maltese fans were at Wembley Stadium on October 8, 2016 to watch Malta play England. First-half goals from Daniel Sturridge and Dele Alli gave the Three Lions a 2-0 victory in their fourth ever meeting with Malta.

Amid the growing enthusiasm for the home qualifier against England, the sale of tickets for the September 1 match officially kicks off on Monday at noon.

TICKET PRE-SALES - The pre-sale of tickets for the MALTA vs ENGLAND 2018 FIFA World Cup European Qualification Match will be available from a number of Retail Outlets as from Monday 26th June 2017.

Ticket sales will remain open until matchday unless these are sold out prior to this date.

ENGLISH FANS - Unless they can get hold of tickets directly from the English FA, visiting fans who would like to sit alongside other English fans can personally purchase tickets for West A Stand, from any of the outlets listed below, strictly on presentation of their passport as well as that of other person/s for whom they intend to purchase tickets, or by submitting an online request by visiting http://mlt-eng.mfa.com.mt by not later than Friday 28th July 2017.

This is in line with security measures requested by both local and UK Police for such requests to be scrutinised ahead of the match. Therefore, a match ticket bought locally does not necessarily guarantee that a person who might be barred from attending such matches and who is in possession of such a ticket, would be allowed to enter the stadium. Similarly, there is no guarantee that a person submitting an online request would actually be allowed a ticket if s/he happens to be blacklisted.

NO REFUNDS and/or EXCHANGE OF TICKETS will be possible once ticket is acquired.

OTHERS - Other football fans, whether visiting or residing locally, (including neutral fans or British persons who either own a Maltese ID or are spouses or relatives of Maltese Citizens), and who wish to sit in sectors hosting the local fans can purchase tickets for any sector in West C, Millennium D & F or South Stand, from any of the Points of Sale listed below, or online from www.mfa.com.mt

ALLOCATED SEATING - Seating in All Sectors in the West A, B and C Stands will be strictly according to the seat number indicated on the ticket.

FREE SEATING - However, seating in all other areas of the stadium will be on a free seating basis.

WHEELCHAIR SPACES - There will also be a limited number of spaces at West A Stand and Millennium Stand D and F for persons who make use of a wheelchair. Such persons will be admitted into the stadium Free of Charge (upon prior request and on a first-come first-served basis). These persons will however need to be accompanied by another assisting person who needs to be in possession of a match ticket bought at the standard rates. Such requests should be sent to worldcup2018@mfa.com.mt

NEW PROTECTION FEATURE - As always, all sales are final without refund. However, there is now an optional protection available in collaboration with a major UK insurer. For a small extra cost, this will provide the buyer with a full refund in the event of a number of occurrences where they can’t attend - including illness, injury, vehicle breakdown, redundancy. etc. Full details are available online or through the pre-sellers.