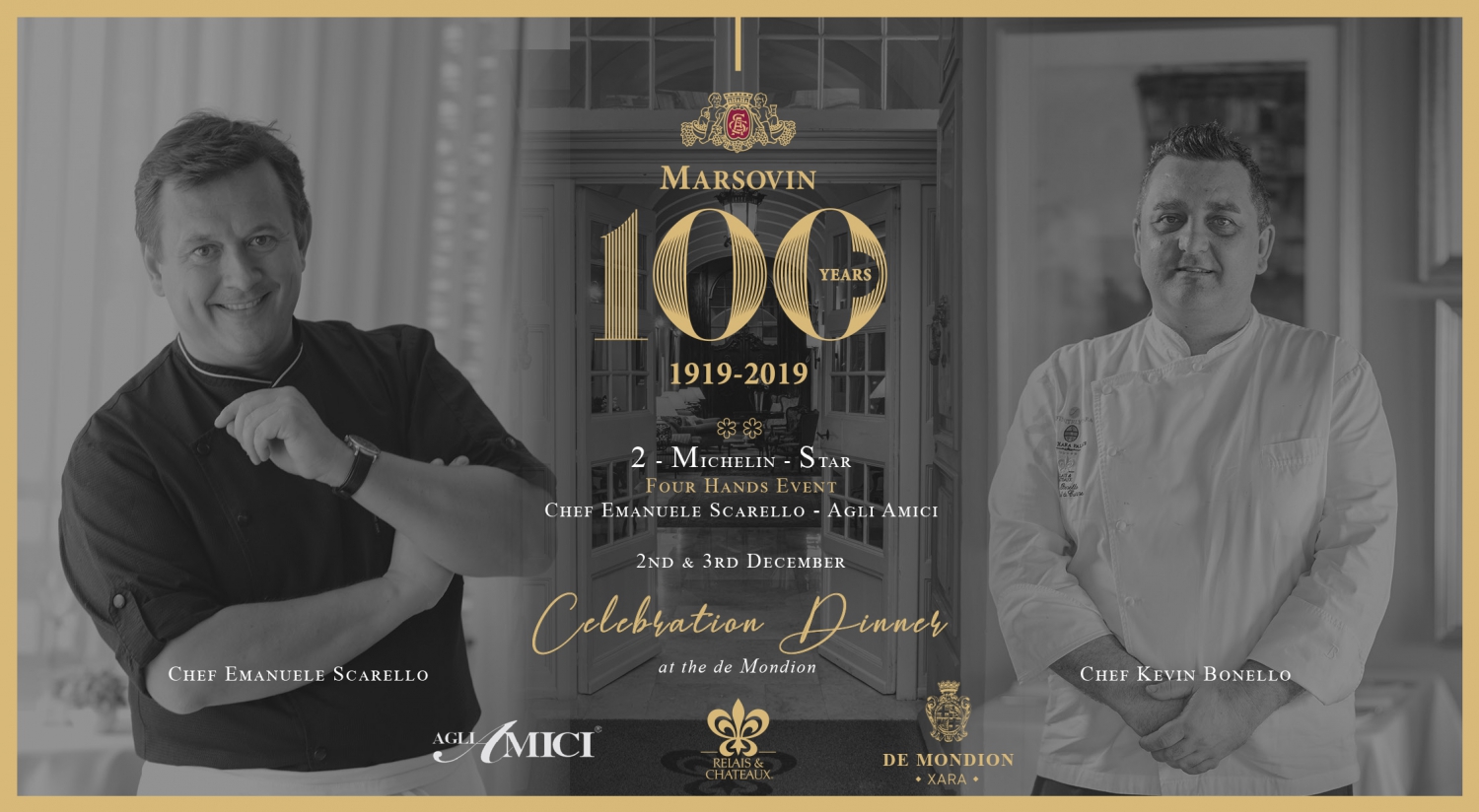 A two Michelin star dinner at the de Mondion

2019 marks the 100th Anniversary since Marsovin planted its first seeds in the winemaking sector in Malta.  To commemorate this milestone, Marsovin has organized a series of events throughout the year leading to its grand finale to be held on the 2nd and 3rd December at the de Mondion restaurant in Mdina.

For this special occasion Marsovin has invited the two Michelin-starred Chef Emanuele Scarello from Ristorante Agli Amici, to prepare a 6 course dinner in collaboration with the acclaimed Chef de Cuisine Kevin Bonello.

Ristorante Agli Amici , situated in Udine,  was established by Chef Emanuele Scarello’s family in 1887, and its renowned success is attributed to hard work, relentless commitment and immense passion.  Chef Emanuele Scarello and his restaurant Agli Amici were awarded the first “star” in the year 2000 and the second one in 2013.  It is the only restaurant in the region of Friuli Venezia Giulia to be awarded the two “stars” by Michelin Guide, included in the Michelin’s Le Soste, and also recognized with three “hats” on Le Guida de L’Espresso.  According to Il Corriere della Sera in 2013 Emanuele Scarello was referred to as the best Italian chef.

Agli Amici is the first and only Relais & Chateaux in Friuli Venezia Giulia, and it is only natural that The Xara Palace Relais & Chateaux lends itself perfectly to this event, a 5-Star Boutique Hotel nestled within the Mdina centuries old bastions, with de Mondion Restaurant being the jewel in the crown.

The Xara Palace Relais & Chateaux Director, Justin Zammit Tabona notes “We are proud to be involved and associated with this event.  Relais and Chateaux aim to provide unique gastronomic experiences, we feel that this event will be made all the more memorable with the help of Emanuele Scarello as well the reputable quality wine of Marsovin”.

Marsovin CEO , Jeremy Cassar said “We are proud of the name Marsovin has made for itself over the past 100 years. It is thanks to the persistence and dedication of all those involved that we have achieved this milestone”. Jeremy Cassar, who is the great-grandson of Marsovin’s original founder adds “We want to end this year’s calender of events with something exclusive, unlike any of the other events we have organized so far. We are absolutely confident that with Chef Emanuele Scarello teaming up with Chef Kevin Bonello, and Xara Palace, those who attend this Celebration dinner will surely enjoy a truly unique experience”.

The evening will begin in the Xara Palace Atrium where upon arrival, guests will be greeted with Marsovin’s Cassar de Malte Methode Traditionelle sparkling wine, served from 1.5L Magnum bottles.  Following this, guests will be served 6 culinary creations exceptionally paired with Marsovin’s premium and boutique wines, including the limited edition 100th Anniversary wine which, on this special occasion, will be served from a 5L bottle.

Booking opens on Wednesday 6th November and are exclusively on a first come first served basis. This exclusive event will be at the price of Eur150 per person.

To reserve your table please call The Xara Palace Relais & Chateaux on Telephone Number : 21450560  or on email: info@xaracollection.com