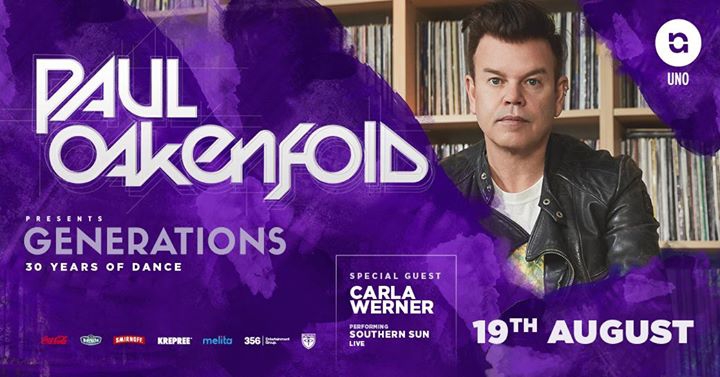 PAUL OAKENFOLD just confirmed that he will be adding Malta to the Generations World Tour - The best Dance Classics in 30 years.

Paul Oakenfold one of the Godfathers of dance music and two time Grammy & World Music nominee returns to Malta for the first time in years where he is returing to his roots taking you on a journey through over three decades of club music.

Paul has provided over 100 remixes for over 100 artists including U2, Moby, Madonna, Massive Attack, New Order, The Rolling Stones, The Stone Roses. Paul has been responsible for hits such as 'Southern Sun' and 'Bullet in the Gun' and voted the No. 1 DJ in the World twice in 1998and 1999 by DJ Magazine.

For dance music & extended set fans alike this a set not to be missed.

Special guest on the night will be featuring Carla Werner Performing 'Southern Sun' Live . The event is going to take place on the19th August 2017 @ Uno Malta

PAUL OAKENFOLD
Three-time Grammy-Award nominated trance legend Paul Oakenfold is deciding to push the limits of concert venues further than any producer before.
On the 19th August the dance music legend will perform at UNO Malta
Indeed, it’s a testament to Oakenfold’s restless curiosity and imagination that his career shows no signs of diminution, even after two decades. A snapshot of his activities through the summer of 2001, for instance, finds Oakenfold hosting Perfecto nights in Ibiza before travelling to America where he’s the headline DJ on Moby’s ambitious Area:One festival tour. After that, there are DJ dates everywhere from Buenos Aires and Mexico City to Clapham Common.

Oakenfold has also contributed the soundtrack to America’s number one box-office movie, Swordfish, the release of which is closely followed by the Perfecto Presents Paul Oakenfold in Ibiza DJ mix album this summer. A relentless schedule that emphasises Oakenfold’s growing global status.

All this began in the late-Seventies when a very young Paul Oakenfold, together with his friend Trevor Fung, cut their musical teeth by mixing soul and rare-groove at a basement bar in London’s Covent Garden. His imagination stirred, Oakenfold decided to find the roots of his new-found obsession by moving to West Harlem in New York.

Oakenfold worked as a courier for local dance radio stations in the Big Apple. By night he checked out the city’s burgeoning new club environment, witnessing the extraordinary birth of hip-hop. Fired up, Oakenfold was determined to break into the music industry.

Returning to London, Paul landed a job as an A&R man at Champion Records. He had a keen ear and quickly signed Jazzy Jeff & the Fresh Prince - the latter, of course, to be subsequently revealed as Will Smith - and Salt n’ Pepa.

From Champion, Oakenfold moved to the London offices of Profile and Def Jam. By this time, however, he was increasingly interested in DJ’ing and producing, twin ambitions that were soon to be amply fulfilled.

In 1987 Paul, together with fellow-DJs Danny Rampling, Nicky Holloway and Ian St Paul, travelled to the Balearic island of Ibiza for a summer holiday. At that time the island was a hippie-inspired community with an over-indulgent club scene. The sunshine was great, however, and the bars plentiful. There was potential for a vivid new underground scene, although no one realised at the time just how Ibiza would come to dominate club culture in years to come.

Paul returned to England with a new Balearic house sound. He began running regular club nights in London, most particularly Spectrum of the Future at Heaven. The club became the fulcrum of a new dance attitude, attracting not only the regular London crews but also out of town rock musicians, including the Manchester bands, The Stone Roses and Happy Mondays.

Despite his dance music reputation, Oakenfold had always been an eclecticist at heart, growing up with an equal affection for rock and pop music. Through the latter part of the Eighties, however, rock had become increasingly irrelevant to a new generation fuelled on the underground explosion of club culture. Its presence permeated everything, from illicit activities through to language and fashion, thus it was inevitable that dance music itself would exert a revitalising influence on rock.

In 1989 Paul and his production partner Steve Osborne were asked to produce Happy Mondays, a band on the seminal Manchester label, Factory. The result was the Madchester Rave On EP, a mash-up of dance, indie, funk and pop that acted as a catalyst for the ‘baggy’ scene, along the way inspiring a whole string of bands in Manchester and beyond. It preceded the biggest album of the band’s career, the Oakenfold / Osborne produced Pills ‘N’ Thrills and Bellyaches in 1990.

It was the start of a long connection between Oakenfold and rock music. He was, for instance, the DJ at The Stone Roses’ historic Spike Island concert and, along with Osborne, remixed such bands as New Order, The Cure and Massive Attack. Indeed, the Oakenfold / Osborne team were nominated by the BPI as Best Producers in 1990.

A year later, in 1991, Oakenfold was approached by U2, who were then finishing the Achtung Baby album. Paul ended up remixing Even Better Than the Real Thing and Mysterious Ways, giving the band an entirely new dimension. Indeed, Oakenfold’s mix of Even Better Than the Real Thing was released as a single in its own right, reaching higher in the UK chart than U2’s original version. These activities were the start of a very long partnership with the band which, most recently, resulted in the remixed Beautiful Day, a number one hit for U2 in the American dance charts.

Determined to control his own destiny, Oakenfold launched his own record label, Perfecto, in 1990. In the subsequent years, Perfecto has been not only a conduit for Paul’s own remix activities but also a platform for new talent, encouraging such DJ talents as Timo Maas and Hernan Cattaneo.

Through the Nineties, Oakenfold’s DJ reputation went into overdrive. He held DJ residencies at Cream in Liverpool and London’s Ministry of Sound, for instance, while every summer returning to Ibiza where the strange little underground scene of the late-Eighties had become a pivotal part of dance culture. In 1995, he also became the first DJ to play on the main stage at the Glastonbury Festival.

As a remixer, Oakenfold chalked up an enormous number of credits, working with everyone from Arrested Development and Snoop Doggy Dogg to Madonna, for whom he remixed the recent single, What It Feels Like For A Girl.

And so Paul Oakenfold entered the new century as the UK’s number one DJ. Maybe that should be the world’s number one DJ, if there was any precise way of quantifying such a claim. Certainly, Oakenfold has travelled the world — among the places he’s played are Anchorage in Alaska; Vietnam; Havana; Beijing; Bombay; Rio de Janeiro; Buenos Aires; Punta del Este in Uruguay; South Korea; Macao in China; Manilla in the Philippines; Johannesburg; and Egypt.

Since the start of 2001, however, Oakenfold has concentrated his efforts on America. In January he fulfilled a personal ambition when asked by movie producer Joel Silver (of The Matrix fame) to score the soundtrack for his next movie, Swordfish. The film, starring John Travolta and Halle Berry, was released in America at the beginning of June, going to number one in the box-office charts after the first week in the cinemas. The Swordfish soundtrack album went straight to number one in the U.S. New Artist Chart.

It should be no surprise, therefore, to find Paul Oakenfold as the headline DJ on Moby’s massively ambitious Area:One travelling festival tour of North America this summer. The shows open in Atlanta, Georgia, on 11th July, continuing through until California at the start of August.

After that, Paul returns to the UK to work on yet another project. This one, however, is heavily under wraps and more will be revealed at the end of 2001. Suffice to say, however, that it will signal a completely new chapter in a career that keeps moving forward.