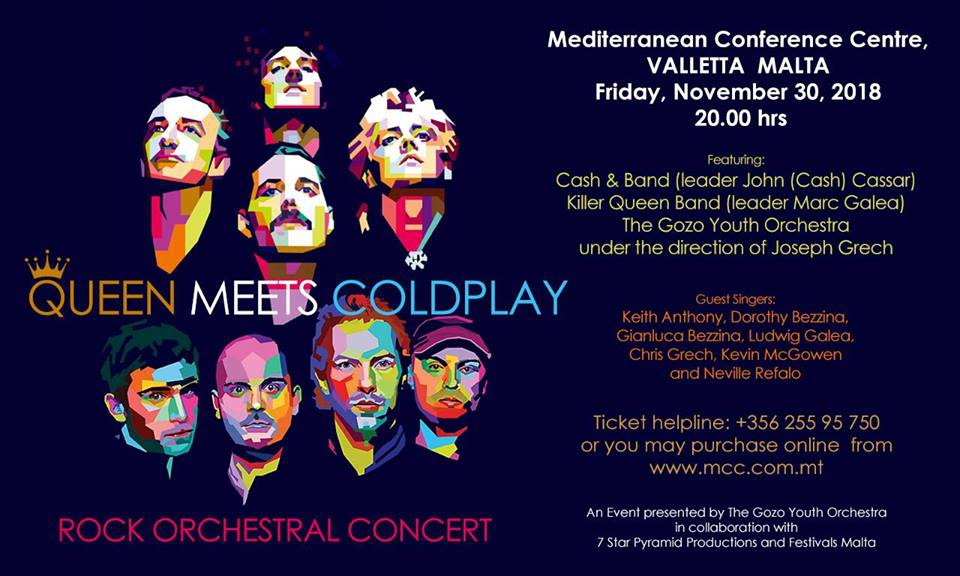 
It’s November 2018 the Gozo Youth Orchestra, under the direction of Mro. Joseph Grech and in collaboration with 7SPP and Festivals Malta, are once again bringing a spectacular Rock Orchestral event to the MCC.

“QUEEN meets COLDPLAY” will take place on Friday 30th November at 8 p.m. Appearing with the Orchestra are Cash & Band and Killer Queen, two of Malta and Gozo’s finest rock bands.

The bands, together with the orchestra, will take turns in performing classic numbers from the vast music catalogues of Megabands QUEEN and COLDPLAY.

On the night they will be joined by some highly talented guest singers, Keith Anthony, Dorothy Bezzina, Gianluca Bezzina, Ludwig Galea, Chris Grech, Kevin McGowen and Neville Refalo, all are very well known on the local and international music scene.

Having had a spectacular success with Dark Side Over Valletta in November 2017, we hope you will find this new production and concept equally entertaining.

In response to some suggestions from last year, we will be removing the seating from the stalls area. It will be a standing only area. Hopefully this will add to the atmosphere, experience and enjoyment of the night, particularly for those patrons who like to be free to move to the music. Looking forward to seeing you there.