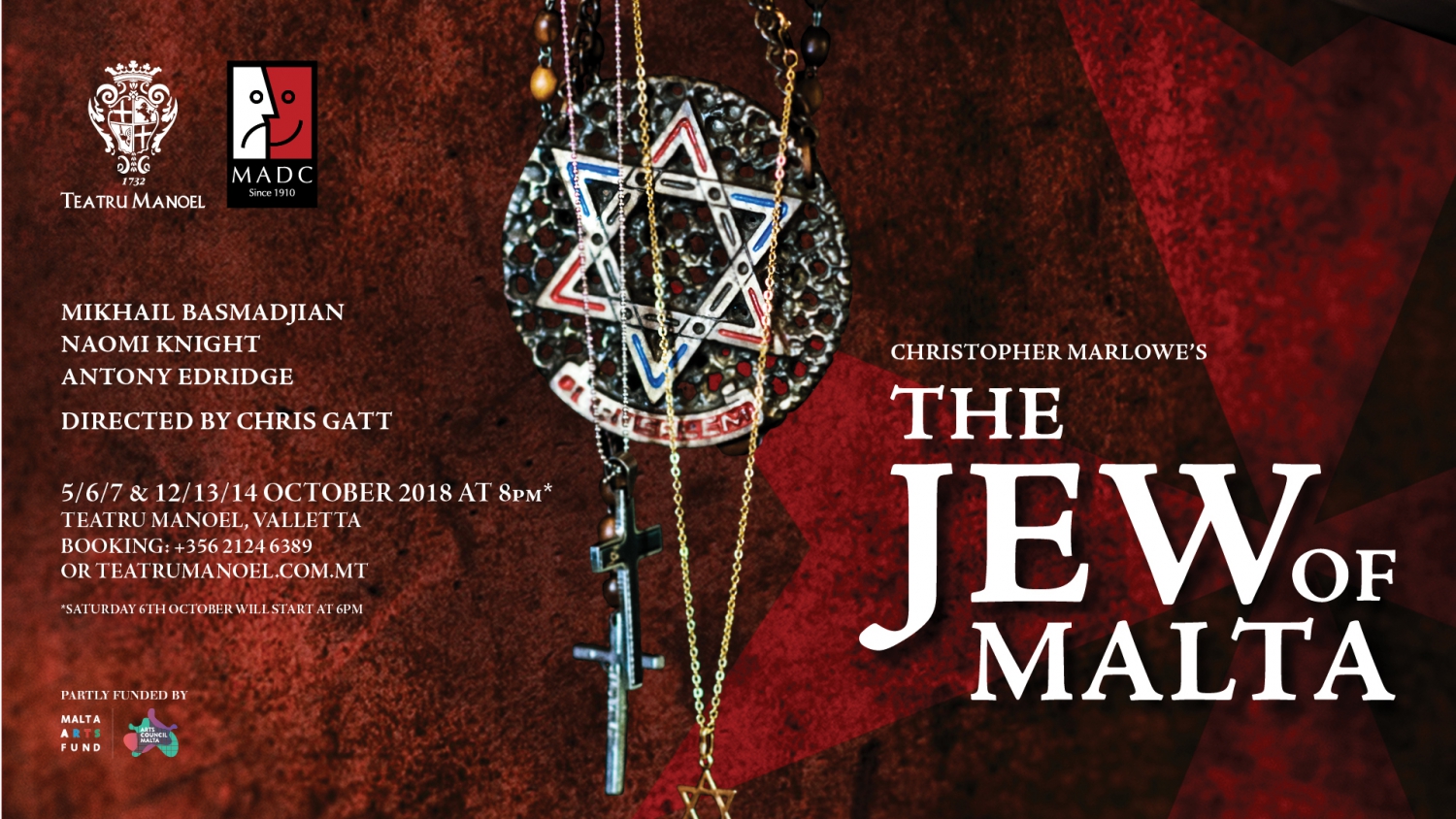 THE JEW OF MALTA

This October, the MADC and Teatru Manoel are producing Christopher Marlowe’s classic 1590s play The Jew of Malta.
Director Chris Gatt describes the play as a “Dark, hilarious and subversive tragi-comedy.  The Jew of Malta takes no prisoners as Marlowe cynically dissects a world where politics, greed and the three Mediterranean religions - Catholic, Muslim, and Jewish - clash; skewering all three as he weaves a fast-paced story at once tragic, farcical, and absurd.”

The Jew of Malta is one of Christopher Marlowe’s lesser known plays.  This may be because of its strange amalgam of tragedy and fiercely black comedy.
In many ways it was ahead of its time and today reads more like a Quentin Tarantino script where violence and bloody slapstick comedy clash in one vibrant, fast-moving play.  It expects a lot from its actors who are sent rushing in and out of scenes with breakneck alacrity in a plot which has so many twists and knots you could construct a macrame basket out of it .
You want to know more about the plot?  Sure you do.  Ok, here goes: We meet Machiavel, the amoral philosopher who believed that the end always justifies the means.  He acts as godfather to the play.  Because this is a play where every character is totally working to their own very selfish agenda.  Sound familiar?
Then there is the governor of Malta who, forced to pay a tribute to the Turkish Sultan Calymuth in order to stave of war, decides that the easiest way to do this is to take it off the Jewish community based in Malta.  One particular fellow is silly enough to protest and immediately sees all his goods and wealth (worth more than all of Malta’s GDP) seized along with his house. Barabbas, for that is his name, retaliates by tricking the Governor's son and his friend into fighting over the affections of his daughter, Abigail.  When they both die in a duel, Barabbas becomes further incensed when Abigail, horrified at what her father has done, runs away to become a Christian nun. In retribution, Barabas then goes on to poison her along with the whole of the nunnery, strangles an old friar who tries to make him repent for his sins and then frames another friar for the first friar's murder. Get the picture?
It is a difficult play which refuses definition: at turns political, satirical, farcical and even tragic.
It brings together characters of the three major monotheistic faiths, and roundly condemns all three.  It is, in short,and typically of Marlowe, a revolutionary play which stings and hurts even as it entertains.