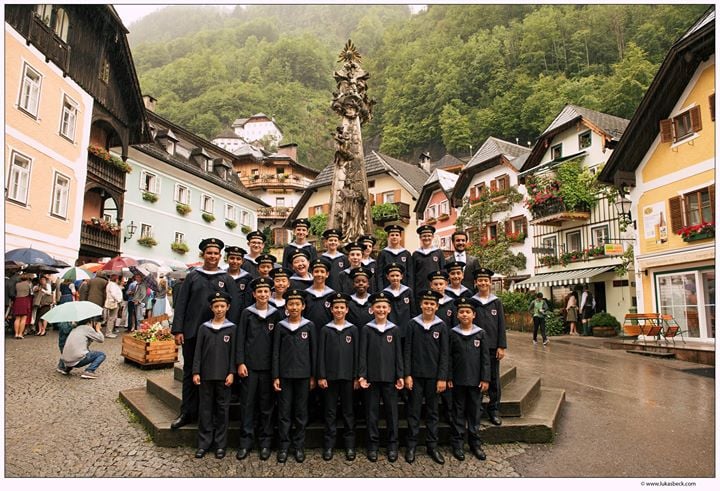 The Vienna Boys Choir goes back to 1498 when Maximilian I (HRR) moved his court to Vienna, lock, stock, and choir, thus founding the “Hofmusikkapelle” (Chapel Imperial), and the Vienna Boys Choir. Over the centuries, the Viennese Court attracted great musicians like Isaac, de Monte, Fux, Caldara, Gluck, Salieri, Mozart, and Bruckner; Joseph Haydn, Michael Haydn, and Franz Schubert were themselves choir boys. Until 1918, the boys sang exclusively for the court. In the 1920s, the choir was reestablished as a private organisation. Since 1926, 2482 Vienna Boys Choir has sung 1000 tours in 97 different countries. Gerald Wirth is its Artistic Director, and its president.

Today, there are 100 choristers between the ages of nine and fourteen, divided into four touring choirs. Each choir spends nine to eleven weeks of the academic year on tour. Together, the choirs give around 300 concerts each year, attended by almost half a million spectators around the world. The choir regularly tours Europe, Asia and Australia, and the Americas.

On Sundays, the boys perform with members of the Vienna Philharmonic Orchestra and of the Vienna State Opera Chorus in Vienna’s Imperial Chapel, as they have done since 1498. In 2012, the choir opened its own concert hall, MuTh; the state-of-the art facility seats 400 and has proven highly popular with both artists and audience.

The choir’s repertoire includes everything from medieval to contemporary music. Motets and lieder form the core of the touring repertoire, as do the choir’s own arrangements of Viennese music. The choir also performs children’s operas and world music.

Tickets are now on sale at www.teatrumanoel.com.mt or from the Booking Office of Teatru Manoel.