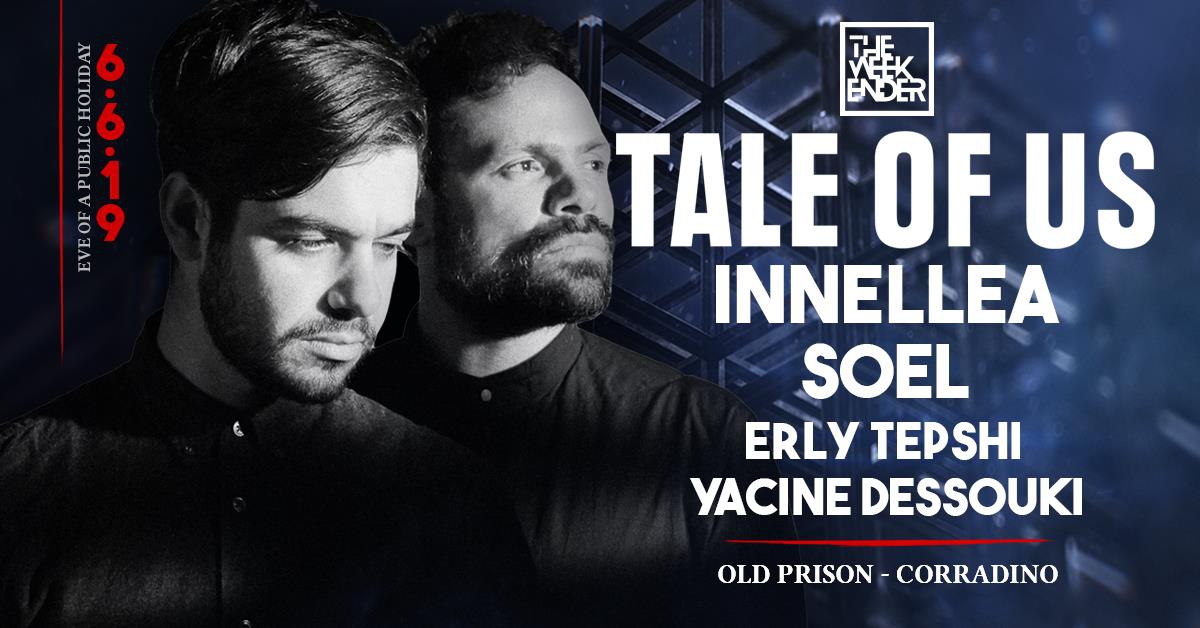 The Weekender presents TALE of US

Tale Of Us is the new unique Berlin based sound scape project of Karm & Matteo Milleri.

This tale dawns in Milan, where Karm and Matteo met at a very young age. The Lombardic capital will turn out to be the preface of their success story as they now reside in Berlin, their inspirational verge.

Born in Toronto, Karm moved to Italy when he was just a child. It was at the tender age of ten when his parents took him to a classical concert that he felt “true love at first sight.” He dreamed of becoming a pianist but eventually settled for law school. Matteo left New York when he was just a year old and spent his late teens booking techno artists for his loft parties. After Karm quit law school, the pair met while studying music production at the SAE Institute. There, they bonded over a mutual love for music and discovered their complementary talents, thus marking the origin of Tale Of Us.

Over the years, the duo have gone through many phases and unearthed plentiful influences. Through a unique production ethos, the music of Tale Of Us carries a singular sense of both urgency and restraint, taking ample time to carefully pace both the listener and the dance floor. In a dramatic play of contrasts, the melody never fails to lead into carefully yet clearly voiced resolve.

The aforementioned can only be crafted by soaking up inspiration in art, music, literature and cinema. These influences range from Nils Frahm, Max Richter and Ludovico Einaudi to the sheer bubbliness and truly original crossover production of ‘How Much Are They?’ by Jah Wobble, Jaki Liebezeit and Holger Czukay. Other all-time favourites include Italian jazz singer Paolo Conte, Evigt Marker & the Cinematic Orchestra.

Tale Of Us' ever-changing sound has resulted in numerous invitations from some of the finest labels in the world. They made their 2011 debut on the Detroit-based label Visionquest. After that came Richie Hawtin’s M_nus imprint and the legendary Belgian label R&S.

2010 marked the birth of Life & Death and in just a few years, together with some friends from Italy, they transformed the label into an anthology of its own at an unseen pace. Very quickly, Tale Of Us became the driving force behind the label, attracting a myriad of talents such as Mind Against, Recondite, Steve Rachmad, Vaal and many others. The tie-in label parties at DC10 Ibiza very quickly made it into the hearts and minds of clubbers. Of their own accord, Karm and Matteo truly shook the vibrant Balearic isle to its core.

Instances peak and perspective comes in good time.
So incepted Afterlife: An odyssey through the realm of consciousness.

Launched mid-June of 2016 at Barcelona’s outdoor Plaza Mayor de el Poble Espanyol, in the good company of me, Dixon, Marcel Dettmann, Monoloc and Recondite, this date proved to be a perfect foreword to their 13-week Thursday residency at Space Ibiza.

Through meticulous musical curation and a more experimental, concert-like approach, Afterlife has sonically revived Ibiza. Characterised by mesmerising soundscapes and lush rhythms, both critics and club-culture as a whole went wild over lineups including Recondite, Rødhåd, Dixon, me, Mind Against, Konstantin, Mano Le Tough, Voices From The Lake, Todd Terje and many more.

Continuing the odyssey they started together, Matteo and Karm will keep honing the roster and pushing the talent they cherish.

With multifaceted focus, Tale Of Us break poetic and emotional boundaries, bringing revery and awe to multiple scenes and levels, usually hemispheres away.