Hamrun is a busy local commercial town. Its main street is dotted with busy shops that are popular with locals looking for a bargain on higher prices found in Valletta and Sliema. No major tourist attractions but to join in the everyday activity or plan a visit during the traditional village feast

Hamrun is located in a very densely populated part of Malta, where the towns and villages practically merge into each other. In fact, Hamrun emerged from the three Parishes of Qormi, Birkirkara and Floriana and grew such that eventually the Parishes of Santa Venera and Marsa emerged from it. Hamrun is built on a plain and due to its more recent establishment, does not possess the winding roads characteristic of older Maltese villages. Its roads are straight and it comes closer to the model of most modern cities. Its bustling atmosphere, with all sorts of shops and businesses, also make it as busy as you could expect of the island's capital, nearby Valletta. Hamrun is home to approximately 9,000 people.

Visit the Lady of the Miraculous Medal Church to discover Hamrun's blessed treasure. In its crypt is buried San Gorg Preca (1880-1962), founder of the Society of Christian Doctrine which was established at the same Church. Dun Gorg, as he is locally known, lived most of his life in Hamrun. His life and works as well as the miracles and graces granted to those faithful to him have led to his beatification in 2001 and recognition as a Saint to all effects in 2007.

Mingling with the "Hamrunizi" you will soon notice that the most prominent name for boys is Gaetan or Gejtu (Gey-tu) due to their strong allegiance to the Patron of the first Hamrun Parish, St Gaetan, which was built in Neo-Gothic style in 1875. However it was the Baroque style Chapel of Porto Salvo, locally known as Ta'Santu Nuzzo, which was originally concieved as a village chapel when it was built in 1736. In the 1960s, the Immaculate Conception Parish Church was built to cater for the increasing population of Hamrun. You can also visit the Our Lady of Atocja Chapel, known locally as Tas-Samra, which is the oldest chapel in Hamrun, dating to the early 17th century. The Church of St. Francis of Assisi Church was built in the 1950s.

Hamrun is quite unique in that it has three Patron Saints: San Gejtanu (St Gaetan), il-Kuncizzjoni (the Immaculate Conception) and San Guzepp (St Joseph). There are three respective band clubs and two Titular feast days celebrated in this town. St Gaetan's festa, celebrated on the first Sunday after 7th August, displays Maltese festa culture at its most exciting due to the rivalry betweent the band clubs of St Gaetan and St Joseph, whose marches are decked out in red and blue respectively. If you are in Malta at this time of year, join the locals, visitors and tourists and experience for yourself the fanfare that cannot be adequately described in words! The Immaculate Conception feast, which is celebrated on the first Sunday of July and on the 8th December, is also worth attending however it is much more subdued. 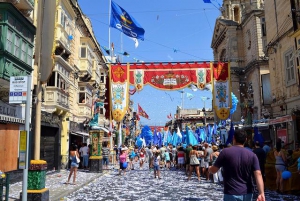 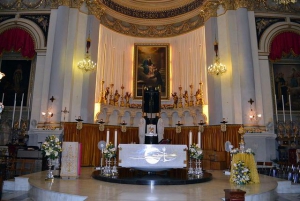 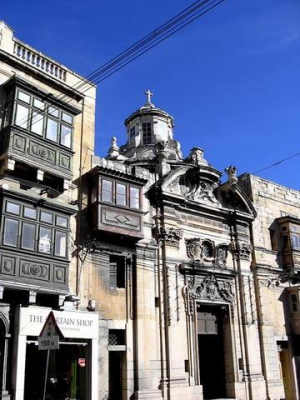 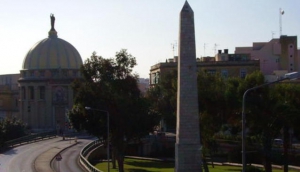