99% of tourists visit Mosta to see the Church Rotunda... and rightly so! Based on the Pantheon in Rome this church is truly magnificent. If you can, visit in mid-August for the feast of Santa Marija. A walk through Wied il-Ghasel (Honey Valley) with its lovely chapel in a cave is also recommended

Mosta is without any doubt one of the oldest settlements on the islands, with archaeological finds dating to pre-history. Visit some of the historical places such as the Victoria Lines and Medieval chapels, and get a local to recount some of the many folktales particular to Mosta, such as the famous legend of the Mosta Bride (L-Gharusa tal-Mosta).

What makes Mosta an absolute must is the world-famous Rotunda: the Parish Church of Santa Marija has the third-largest dome in Europe and the ninth-largest in the world. The Mosta Rotunda stands huge and impressive and has special sentimental significance for the local 'Mostin' and Maltese Christians. This is because a German bomb which fell on the Church during World War II became wedged in the dome and did not explode, therefore the lives of hundreds of people part-taking in worship inside the Church were saved - nothing short of a miracle. See a replica of the bomb in the Church museum.

Visit Mosta on the festa of Santa Marija on 15th August or attend the Good Friday processions in Mosta if you are on the island during these periods, as these are among the most popular religious activities on the island, with locals and tourists alike. In Mosta there are two band clubs and two fire works factories which make spectacular fire works displays.

Mosta is a significant and bustling town located in Central Malta although its motto 'Spes Alit Ruricolam' bears testimony to its rural past. Go shopping in Mosta for all kind of things which you will find at lower prices than the prime shopping areas in Malta. 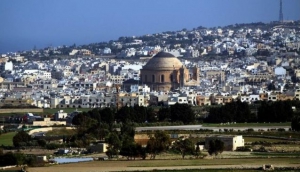 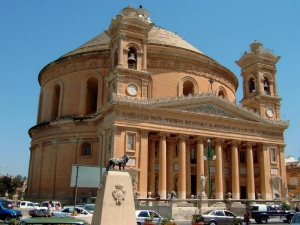 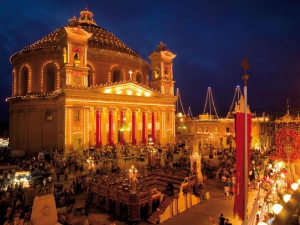 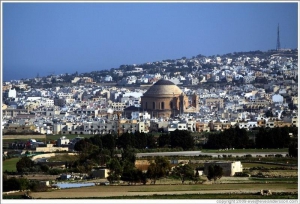 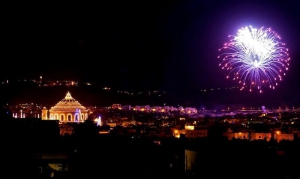