Whilst many multimedia shows depict the life and times of the Knights of St John in Malta, this is one of the only visible and tangible attractions of the glorious religious order. The Armoury museum is still housed in the majestic building where the knights themselves kept their arms collection.

The Palace Armoury is one of the world's greatest arms collections housed in their original buildings, and ranks among the most valuable historic monuments of European culture. The Knights of St John were a unique brotherhood of resolute warrior monks. From Malta, their island stronghold, these combatant aristocrats from the noblest houses of Europe, carried out their relentless crusade against the Ottoman Turks. The Palace Armoury is certainly one of the most visible and tangible symbols of the past glories of the Sovereign Hospitaller Military Order of Malta.

Grand Master Alof de Wignacourt transferred the Order's arsenal to the palace in 1604. It was the pride of the Order. Apart from being lavishly adorned with impressive arms trophies, it held enough arms to equip thousands of soldiers. It was housed in the magnificent hall at the rear of the building, right above its present location, which were originally the stables. In 1975, the entire collection was transferred to its present ground floor location to make way for the Islands' new House of Representatives.

During the 1850s, the British Government intended to remove the collection for safe keeping to London. However, this was never fully undertaken and in 1860 the armoury was officially opened as Malta's first public museum.

Although only a fraction of its original splendour, the Armoury still contains abundant material of Italian, German, French and Spanish origin from principal arms production centres. Outstanding examples of splendid parade armour by master armourers command pride of place.

The armour decorator's art is amply displayed on various exquisite pieces. Also displayed are exotic examples of Turkish armour in the Islamic & Ottoman section. The armoury also constitutes a rare example of a working arsenal surviving in its original building. It is all the more interesting because it includes with the massed arms of the common soldiers, the enriched personal armours of the nobility. 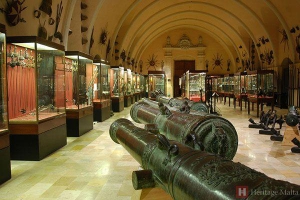 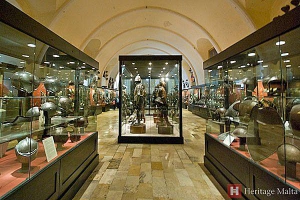 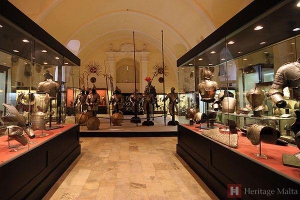 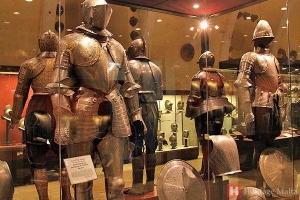 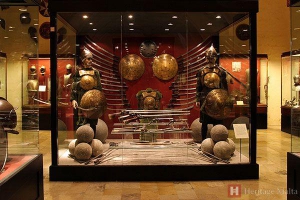 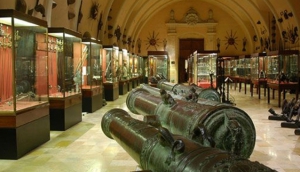 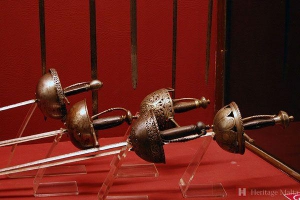