Never has the phrase 'icing on the cake' been so appropriate... this is the gem of the capital Valletta. The detail of this beautifully ornate cathedral is nearly too much to take in. Make sure to also leave good time to enjoy the amazing tapestries and Caravaggio's unique works of art.

St. John's Co-Cathedral is considered to be the crown jewel of Valletta, Malta's capital city. While its stark facade does nothing to indicate what artistic treasures lie within, the moment you step inside this divine monument built by the Knights you will quickly understand why this title is hardly an exaggeration.

Take your time to appreciate the detail of the richly gilded arched columns, intricately inlaid-marble tombstone flooring, divinely painted vaulted ceilings and works of art and you will find the hours pass as though in moments.

The Co-Cathedral was built by the famous Maltese architect Girolomo Cassar between 1573 and 1578, commissioned by Grand Master Jean de la Cassière and served as the Conventual Church of the Order of the Knights Hospitaliers of St John, known as the Knights of Malta. The Cathedral contains eight rich chapels, each of which was dedicated to the patron saint of the eight Langues, literally meaning tongues, referring to the the various areas of provenance of the Knights.

The Rich Interior of the Co-Cathedral

Much was invested in the embellishment of the interior of the Co-Cathedral, which became a celebration of Baroque art. Much of it is the work of Italian Knight and artist Mattia Preti. Preti painted the vaulted ceiling and side altars with scenes from the life of St John. Look up at the ceiling next to each column and notice the figures that appear like statues but are, in fact, painted with such expert use of light and shadow as to create the remarkable three-dimensional effects. The actual carving into the limestone walls of the Church is also the work of Mattia Preti, who performed such works in situ.

When walking around the Cathedral it is hard not to notice the elaborate artwork on its floors as well as its ceiling, walls and arches. While being marvellous, it is also a little eerie. The flooring is a magnificent marble mosaic of 405 tombstones belonging to many 16th to 18th century European nobles and Knights and each depicts the coat of arms and images relevant to each personality's life.

The Beheading of St John by Caravaggio

Perhaps the most famous of artistic treasures to be found within the Co-Cathedral of St John and the absolute 'must-see' is Michelangelo's painting of the Beheading of St John. Head towards the Oratory of the Cathedral to see what has been described as his all-time masterpiece and which is indeed the only painting to which Caravaggio has put his signature.

The Beheading of St John was painted in 1608, oil on canvas, measuring 361 x 520 cm, making it the largest work the artist ever painted. The painting depicts the scene of St John's gruesome murder in the courtyard of a prison with the stream of blood flowing from St John's neck the place chosen by Michelangelo to sign his name. On the Oratory's right wall is another smaller painting by Caravaggio, the elderly St Jerome sitting with a pen in his hand.

A visit to the Co-Cathedral is not complete without a visit to the adjoining museum. Among the contents of the St John's Co-Cathedral Museum are tapestries, paintings and other art objects belonging to the Grandmasters or which were formerly displayed in the Chapels. 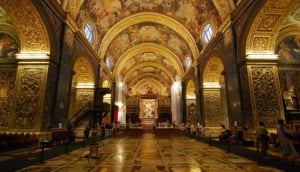 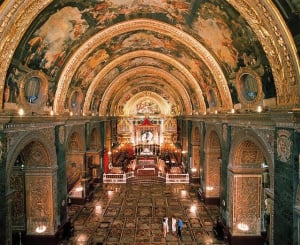 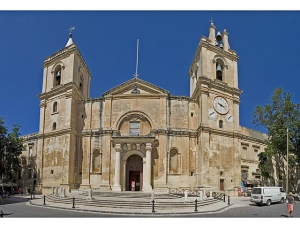 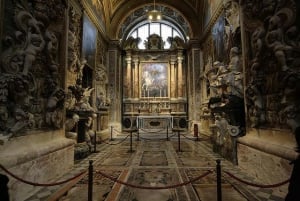 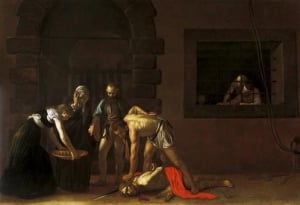 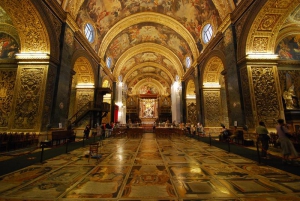